He’s also the award-winning graphic designer of a national music journal, an accomplished electronic musician, the creator of a poetry festival, and a mentor to hundreds of students.

His poetry has been presented by the Kennedy Center, was published alongside two national book award winners in an anthology of African American poetry, and has been featured in the Chicago Tribune, by PBS Newshour, SC Public Radio, Huffington Post, A&E Network, Charleston Magazine, Charleston City Paper, North Dakota Quarterly, Post and Courier, Charleston Scene and several other publications.

In 2019, he won a Governor’s Arts award in South Carolina, and was named the artist-in-residence of the Gaillard Center, a world-renowned performance and education venue.

His poetry has been studied in classrooms across the country and has been interpreted for ballet, jazz, modern dance, opera and theater.

New album, “rhythm vaccine.” Created in quarantine on a Digitakt.

I am lucky enough to be doing exactly what I want to be doing: creating videos, graphic & web design, playing music and writing poetry. How do I do it all? With love.
What’s your story? Contact me. 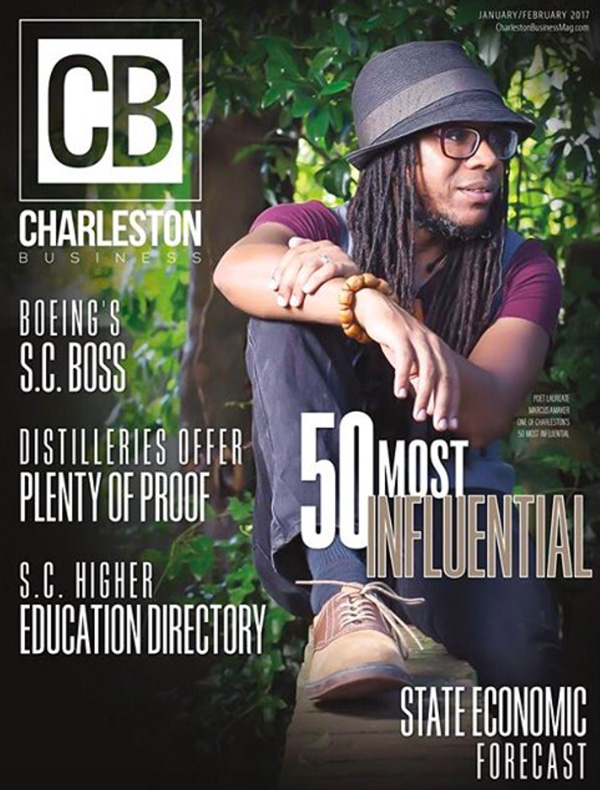 Sign up for my newsletter here. or contact me by emailing marcus@marcusamaker.com
“His eye for design and ear for words, plus his sublime taste and judgment, make my work very appealing. Marcus is totally unique—he’s connected to the traditions that came before him and uses them to inform his very contemporary outlook. He’s thoroughly a 21st-century guy.” - Jack McCray.
© Copyright 2020, Marcus Amaker Design
Marcus Amaker, Poet Laureate: "The Birth of All Things"