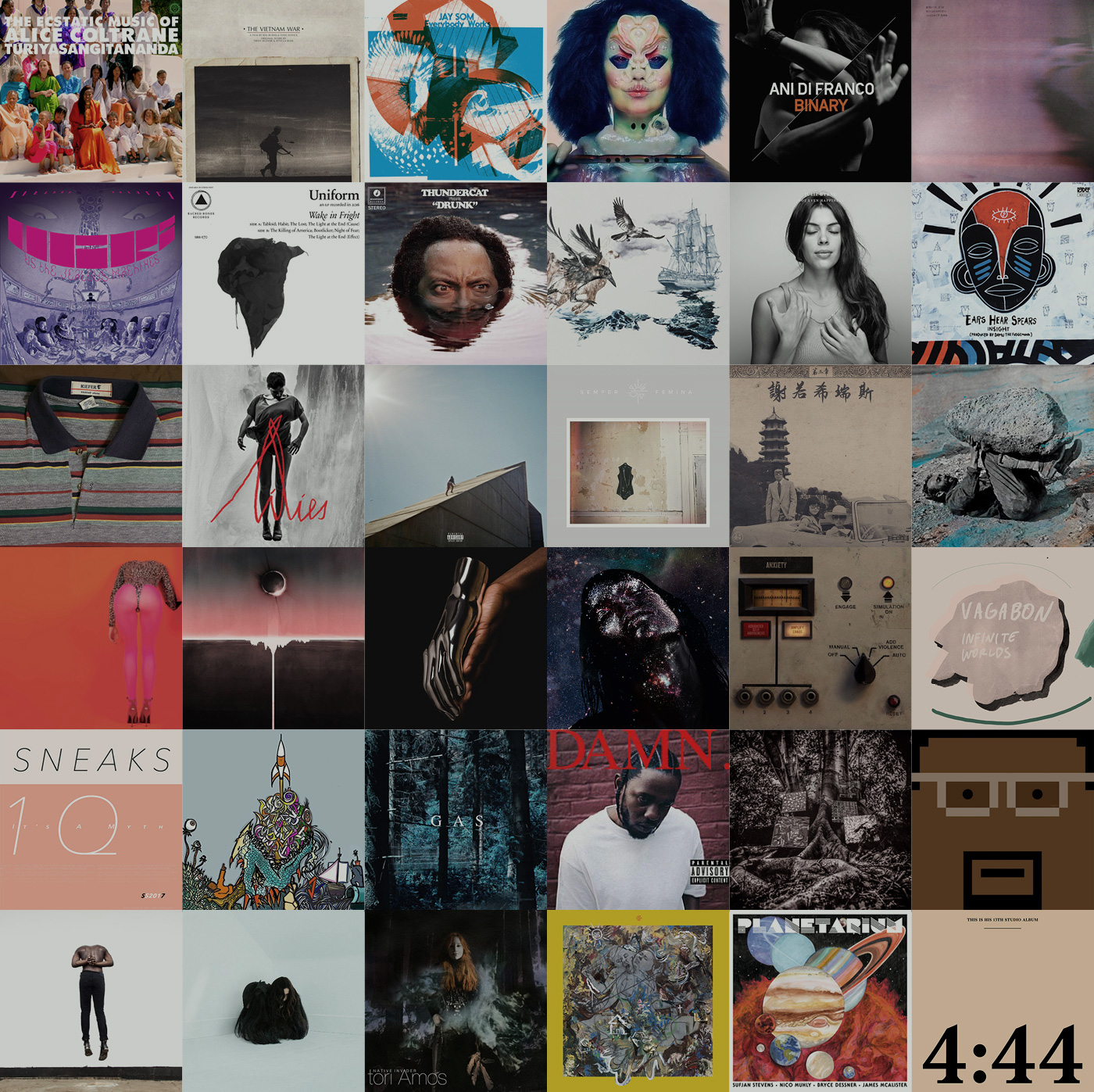 37. The National – Sleep Well Beast: Their best album since 2010’s masterpiece, High Violet. I dig it when the band gets experimental – electronic touches are all over this moody and brilliant record.

33. Tori Amos – Native Invader: “Broken Arrow” is the song I listened to the most in 2017. Why? It’s Tori in full Scarlet’s Walk mode – political, personal, musical and emotional. The rest of the album is just as good.

32. Chelsea Wolfe – Hiss Spun: This record took some time to … understand. But once I did, I kept coming back for more. It’s scary, confrontational and melodic at the same time.

31. Moses Sumney – Aromanticism: I need more albums like this in my life. Quarrel might be the most beautiful song of the year.

30. Karriem Riggins – Headnod Suite: All beats and funk and love, from one of the most underrated producers of our era.

29. Kamasi Washington – Harmony of Difference: A subtle album, when compared to the first. But still so, so, so good.

28. Kendrick Lamar – DAMN:  Damn, this album isn’t NEARLY as good as To Pimp a Butterfly. BUT, there’s no denying Lamar’s talent. Another perfect bridge for “old school” hip-hop fans to the modern era.

26. The Juju Exchange – Exchange: Jazz is alive and well, my friends.

25. Sneaks – It’s a Myth: 10 songs in 18 minutes. You have to appreciate the brevity. The songs are so deceptivly simple they will easily get stuck in your head.

24. Vagabon – Infinite Worlds: Laetitia Tamko’s songs are like a trip to the 90s. I feel like I’m back in college. It’s the best kind of nostalgia.

23. Nine Inch Nails – ADD VIOLENCE: Though not as strong as last year’s Not The Actual Events, ADD VIOLENCE is more of Trent at his best.

20. Mogwai – Every Country’s Sun: This album got better with every listen. I’m unsure that Mogwai has ever put out a bad album.

19. St Vincent – MASSEDUCTION: The packaging, the music, the videos … everything about this era of Annie Clark’s career is gold. And “New York” is a song for the ages.

18. Forest Swords – Compassion: A riveting emotional journey from Matthew Barnes. Turn off the lights and dig in.

17. Onra ‎– Chinoiseries Pt​.​3: An underrated DJ / beat maker finishes his trilogy of albums with the best entry. I can’t get enough of it.

16. Laura Marling – Semper Femina: Laura Marling is one of our most prolific musicians. All of her albums are epic, and this one might be the best. I don’t know how she does it.

15. Daniel Caesar – Freudian: Simply the best R&B/soul album I’ve heard in the last few years. It all feels so … effortless, like the best Stevie Wonder records. You start wondering if he’s tapped in to some kind of magic.

14. Melanie de Biasio – Lilies: Speaking of magic, the first time I heard Gold Junkies, I almost fell to the floor. What a song. What an album.

13. Kiefer – Kicking it Alone: The melodies and beats are perfect, and it’s the best mix of electronic music and jazz. So damn smooth.

12. Insight The Truncator & Damu The Fudgemunk – Ears Hear Spears: To all of my friends who say “hip-hop music isn’t as good as it used to be,” please listen to this.

11. Julie Byrne – Not Even Happiness: There is no equal to the emotional depths of these songs. I’m beyond impressed with her lyrical and melodic powers. Give me more, please.

10 . Do Make Say Think ‎– Stubborn Persistent Illusions: My favorite “post rock” album of the year, by far. I kepe hearing new things every time I listened to it.

9. Thundercat – Drunk: I can’t say enough good things about this album. Also, it’s refreshing to have some humor in music. People are too serious these days.

8. Uniform – Wake in Freight: Bruh. Not since Rage Against the Machine have I felt the need to break something when I listen to an album. Some might call this album “metal,” but it’s more industrial to me. Not a bad song on here.

7. Shabazz Palaces – Quazarz vs. The Jealous Machines: Easily my favorite hip-hop record of the year, because of its depth (check out the full-color comic book that came with the album.). Also, lyrically, Shabazz Palaces are on some Gertrud Stein ish. Gimme more. Quazarz: Born on a Gangster Star was also good, but this was the better album of the two.

6. Kettenkarussell ‎– Insecurity Guard: Every beat seemed to be in its right place on this album. What do you call this record? Abstract, IDM, Ambient, Deep House, Downtempo? Hmmmm.

5. Ani DiFranco – Binary: Now, listen. You know I love me some Ani. There’s a reason. She’s our generation’s best songwriter (please debate me on this. you’ll lose). And she’s hella consistent. “Binary” is the song about “laboratory monkeys, snipers, robots f*cking you and cyborgs.” And “Play God” is the best song about reproductive freedom I’ve ever heard. And the whole thing is mixed so well, you’ll be taken to another world if you blast it on good speakers. Immaculate production. Get this album. Please?

4. Bjork – Utopia: Now, listen. You know I love me some Bjork. There’s a reason. She’s our generation’s most radical and forward-thinking artist. (please debate me on this. you’ll lose). And she’s hella consistent. Utopia was a grower after the underrated Vulnicura. Probably because Bjork talked this album up as a “happy” album … but Utopia is quite dark, musically. But, DAMN, it’s good. “Loss” sounds like it came from “Homogenic.” The opening three songs flow so well into each other. I can’t get enough.

3. Jay Som – Everybody Works: I’m still amazed at how quickly this album grabbed me from the first listen. Like Vagabon, it sounds like it came straight from the 90s. All guitar and melody and hushed interludes and … perfection. Take it for a spin, because it sounds great on vinyl. (Listen here).

1. Alice Coltrane – World Spirituality Classics 1: The Ecstatic Music of Alice Coltrane: Archival material from the wonderful Alice Coltrane finally made its way onto wax this year. Hearing these songs are a revelation. Who knew she could sing so well? Who knew that ambient music could be so joyous? The vibrations are high with this one. Do yourself a favor and let Alice take you away.